The first of Hungarian emporiums opened its gates to public at 13thMarch 1911. It is located on the site of Terézvárosi Hall (Terézvárosi Mulató) – from the original building now only one wing exists, opened to Paulay Ede Street with the Lotz hall -, Andrássy Street 39. The building made of reinforced concrete has glass-covered atrium and was designed by architect Zsigmond Sziklai, assigned by businessman Sámuel Goldberger. The roof was used as an outdoor cafe in summer and as an ice ring in winter. After the building survived the WW II, from 1949 it was utilized as a warehouse for Department Stores of The State (Állami Áruházak), later for National Corporation of Bookspread (Állami Könyvterjesztő Vállalat). The building was reopened in 1964 as Divatcsarnok (Fashion Hall).

Considered as a good investment by the Hungarian State Treasury, several concepts were made for the further usage of the building, for example ideas of a Guggenheim Museum, Architectual Museum and music hall. In 2006 instead of government investments the building was bought up by Orco Property Group, with purpose of restoring the function of department store. An amoebae-like conception was made by  Manuelle Gautrand, but it was rejected by the Commity of Monuments because of the major need of modification of the structure. After all of this, the task of planning was entrusted to János Tiba.

The function of department store was only renewed on the first two floors, because of the difficulties occurred by organizing the corridor system and the lack of interest by investors. Today this part is used by Alexandra Bookstore. On the other stores office suites were formed, facing to the beautiful atrium with glass walls, gaining light from there. By this way the transparency of the building remained, decorated with the hanging stairways of the atrium. On the roof terrace appeared a glass-bubble, sheltering an elite club with amazing panoramatic view, thanks to that all the disturbingappliance was carefully covered with corten steel. One of the most beautiful cafes of Budapest is located in the Lotz hall, where you can get by passing the escalator against the main entrance.

The design is overall very touching, the pattern ofglass surfaces referring to the former ice ring, the visible original structure, the frescos and the chandelier of the Lotz hall shining bright with their old fame. 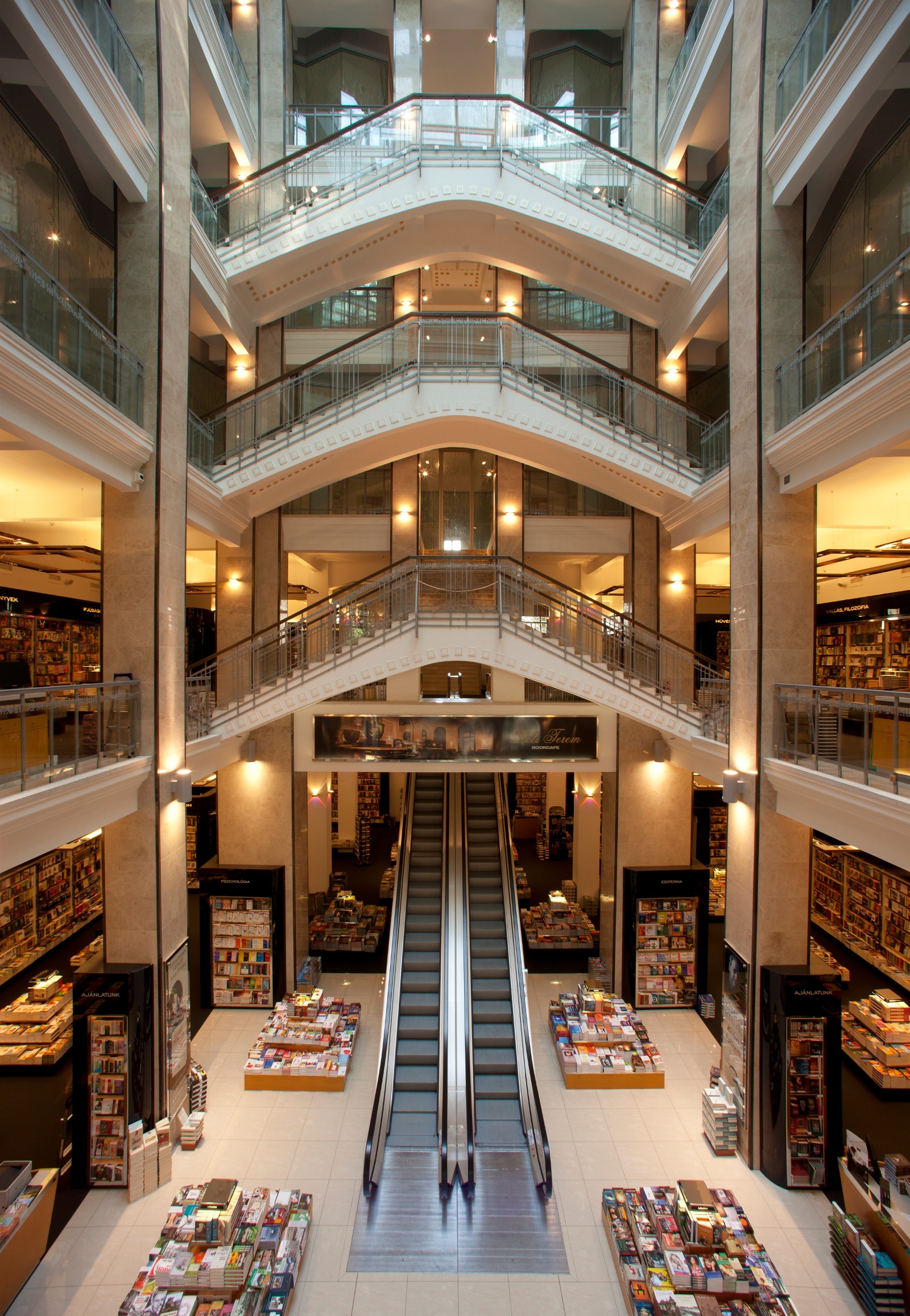 Tagged on: Gerle Ákos, Kiss Ida, Tiba Építész Stúdió, Tiba János
By | 2013-12-26 | '06-'10, trade, Pest, service |
This page belongs to the Critical Analysis of Public Buildings course, held by the Department of Public Building Design at the Technical University of Budapest. With the contribution of our students our aim is to create a comprehensive database collecting the most significant architectural works of the last 10-15 years in Hungary, at the same time making all the related publications also available. The homepage is updated regularly, the order of the publishing does not relate in any ways with the architectural value.