Audi Factories has settled in Győr in 1993, when they occupied a 100 000 m2 factory hall. In front of the hall, a six-story office building was constructed, framed by a gradually stepping dressing room-house on each side. The factory celebrated its 10 year jubilee in 2003, and the centre has shortly outgrown the original office building. The factory called for a design competition then set the goal of merging the existing both on the ground and in space with the new parts.

The design task involved the refurbishment of the changing-blocks with a circulation link to the existing office building, and the creation of a new atrium. In addition a laboratorium, training workshops, offices, a restaurant and a bar were also required.

As a building, the factory is presented as a lengthy, four hundred and fifty metre-long white ribbon. The monolithic changing blocks are twenty five meters deep, enclosed by factory hall the back. The only chance to let the natural light in was to cut the mass, creating a porous and slightly transparent appearance. The exterior surface of the building received an elegant hole-texture. By pushing the windows onto the inner flush of the walls, the monolithic mass became emphasized even more.

The changing block was built with a tunnel shuttering technique, constructing a solid concrete wall at every six meters. The rhythm of the perforations is repeated on each level, by changing only the position of the lightwells. The transparency of the spaces is created not only horizontally, but vertically as well. The half-story-high level difference of the two office buildings is solved by mass of the staircase in the gap. The level-difference becomes especially dramatic at the junction of the glazed offices, the void, and the landing. The rebuilt complex is displayed as the discrete modulation of the four hundred fifty meters long folding screen. (It faces the “Poppy” Event Hall).

The house reflects the vision of Audi itself, thus provides the surplus as a building. 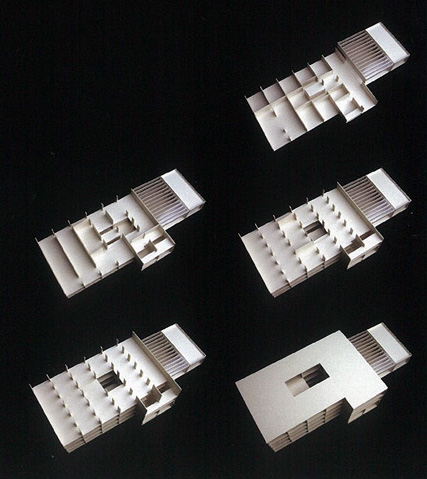 Tagged on: 3H építésziroda, Csillag Katalin, Gunther Zsolt
By | 2014-01-02 | '01-'05, Győr, office |
This page belongs to the Critical Analysis of Public Buildings course, held by the Department of Public Building Design at the Technical University of Budapest. With the contribution of our students our aim is to create a comprehensive database collecting the most significant architectural works of the last 10-15 years in Hungary, at the same time making all the related publications also available. The homepage is updated regularly, the order of the publishing does not relate in any ways with the architectural value.