The objective of this major renovation of its thirteenth-century basilica was the retuning of its interior to reflect contemporary patterns of liturgical use, whilst also recovering something of the spirit and spatial quality of the original architecture, lost amongst the accretions of later interventions. Founded in 996; priding itself on a historical past, the abbecy has a grand building with contemporary architectural creations of the highest standards in its physical and spiritual centre of gravity. Now also inside its walls.

The ancient basilica had been rebuilt several times – however, the church already been converted in 1137 and remodelled in Gothic style in the 1220s – this was overwritten in the 1870s by Ferenc Stornó with great self-confidence when in line with the idea- image of the Middle Ages prevailing during the office of Arch-Abbot Krizosztom he reshaped the interiors with a purist approach to the protection of historical monuments whilst creating the integral design also revealed today in the case of the monastery church and its adjacent structures by extensive demolitions and remodellings.

During the millennial celebrations of its existence the desire to take a new spatial approach was formulated in line with the spirituality of the founders – to create a new sacred space meeting contemporary needs. Members of the community had the feeling that the conditions of the sacred space of the basilica were no longer suited to express its spirituality. The niche of human beings in the world and its spatial projection defines the making of the harmony.

Members of the friars’ community have thus uttered the feeling of lack owing to the loss of such an equilibrium. Arch-abbot Asztrik Várszegi in 2003 established the Basilica Workshop with the task to resolve this kind of uncertainty and to lay down the foundations of the remodelling based on the theological explanation. For the community it became obvious that the physical space existing then (including the object- elements accummulated and adjusted through the centuries) could not be reconciled with their approach to space demanding simplicity and clarity.

The community of friars (after asking Peter Zumthor, who was too busy at the time to take the task) invited an English architect to make the designs. That was the time when in the Czech Republic the construction of a Trappist monastery has been completed after designs by John Pawson that had aesthetic dimensions refelcting the ideas friars of Pannonhalma cherished. The end of August saw the reconsecration of the ancient space of the basilica in Pannonhalma. The altar of the crypt now treasures relics of St. Martin of Tours, which means the revival of the aetiological myth according to the customs held by the early Christian church.

The visual complexity of the dislocated object-components has been replaced by an interpretation concentrating on the unambiguous elements. To emphasize the longitudinal axis of the space the baptistry was built beneath the western tower. The flooring of the shortened church space that can be used by the congregation now rises above the planum made higher by stairs. Among the stalls of the enlarged choir of the friars new there are two hubs: the superaltar standing closer to the faithful and the ambon positioned in the east. It is an integral communion-space in its complexity where the Word realized in words and in body creates the compact centre of the community. In the east the spatial row is finished by the highly elevated altar space with a ciborium to serve the liturgical space like a tabernacle – beneath there is the undercroft with its sacred relics. 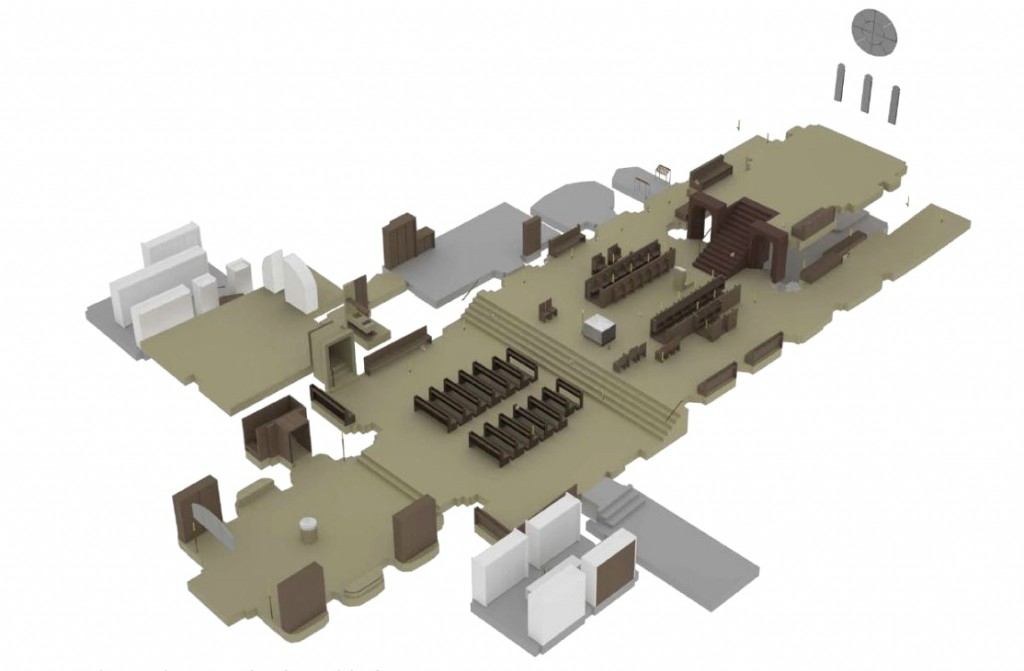 The clear formula of space is an open and transparent system of spaces ranging from the adoption of Christianity to mortality. Its components are emphasized by the precious material of onyx. It is evidently the monolithic mass of the altar which has the most characteristic design. This is the densest point of the space both liturgically and architecturally. There are onyx boards now filling in the glass windows of the western gate and the eastern spatial wall. Light pierces the material with a magnificent effect of mystery – these are the lightest points of the space also in the architectural sense, as they are to be explained in relation to the object components of the interior with mythical powers. The large circular window replacing that of St. Martin (with its lens-like polish) serves to let natural light illuminate more and more powerfully toward the centre.

Based on archaic spatial dividing structures, the conception is fed by the installation-attitude. This is perfectly realized by the newly born objects: besides the liturgical spatial elements there are the stalls made with precise minimalist joint of solid walnut, pews and mobilia-chairs, items of furniture in the sacristies, beautiful standing illuminating bodies created with abstraction in the nave and their hanging variations in the side-aisles. Reflecting precise sense of proportions and noble simplicity, elements created with such a characteristic design are worthy matches of the massive historical walls and vaulting structures.

The spatial installation thus born can be rated as perfect owing to a beautiful spatial reading of the contemporary space-perception of the community existing since the beginnings of Christianity in Hungary. Thus the space is complete.

update, 2015: the altar space was finished in 2015, when the old wooden altar fron the 19. century was taken away (see pic. nr. 4.! - source here), which was impossible earlier because of the opposition of the Authority of National Monuments. 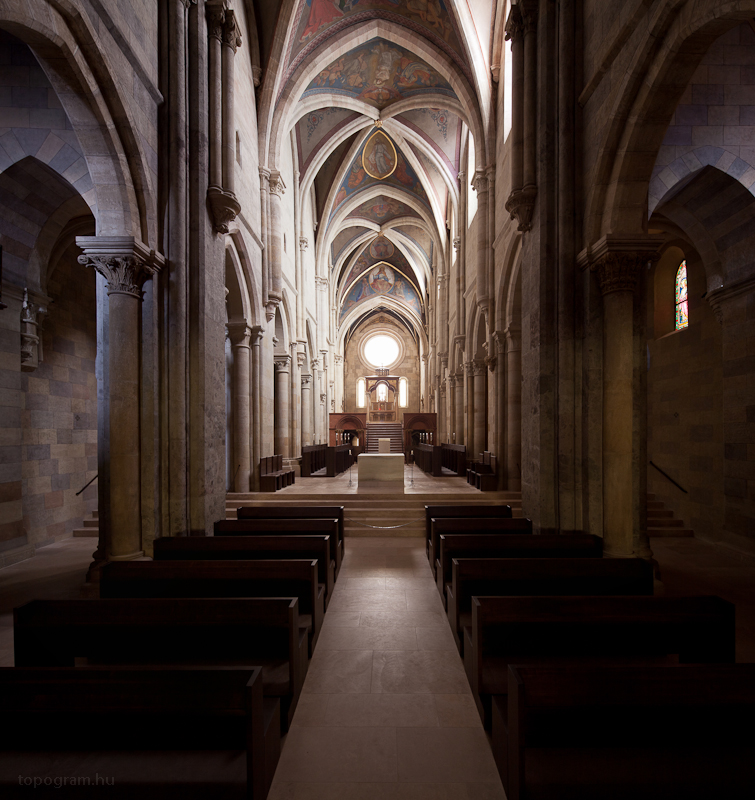 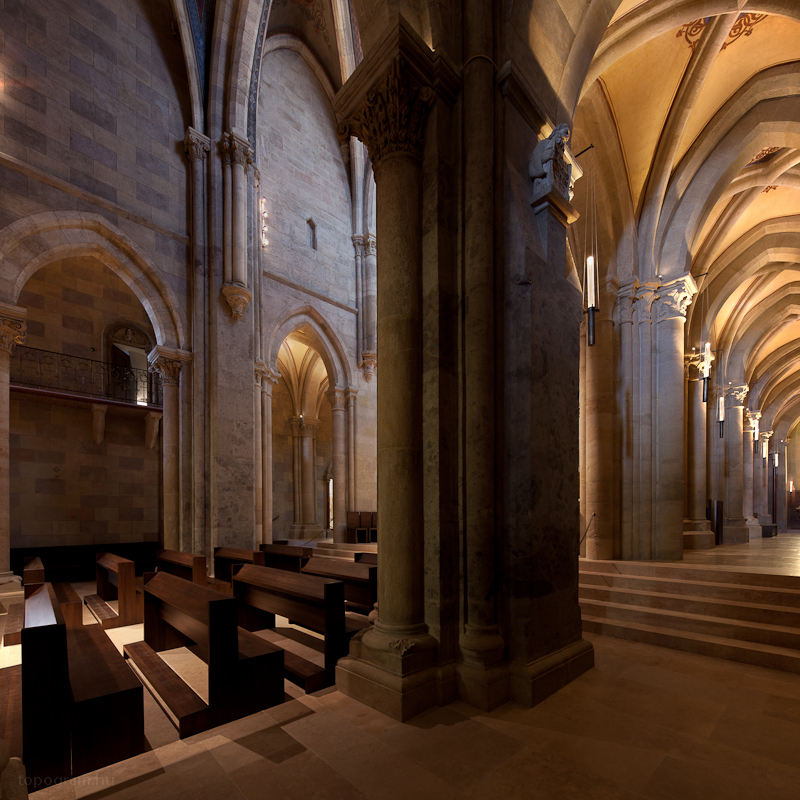 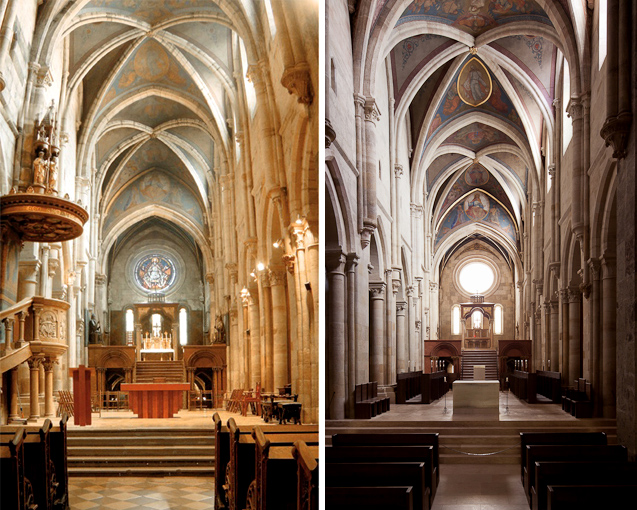 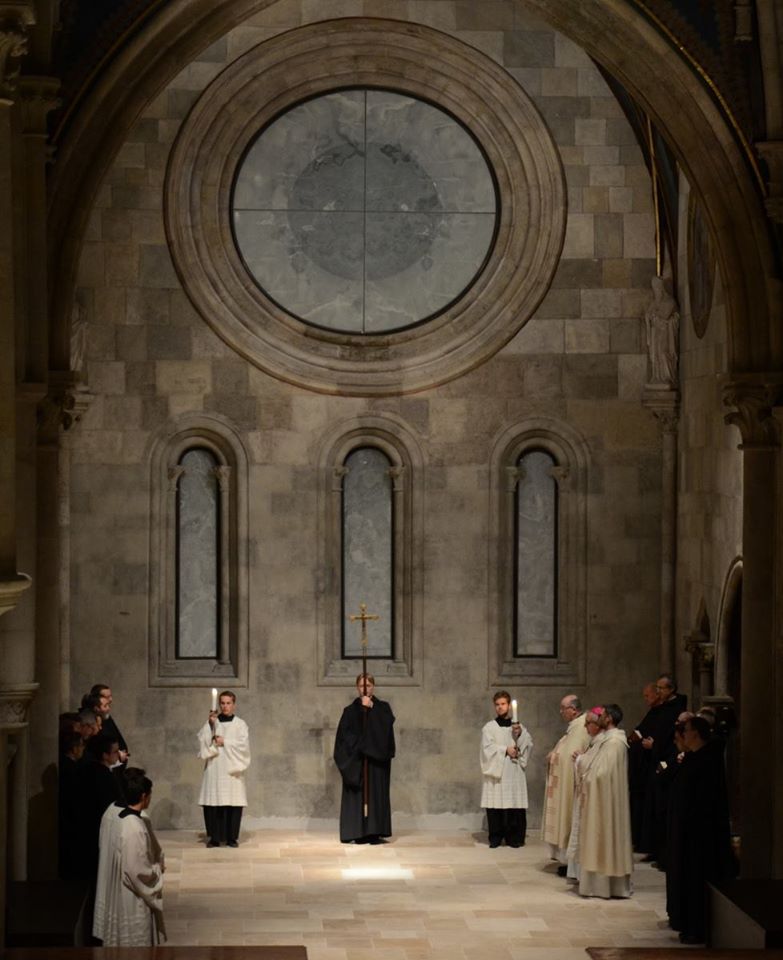 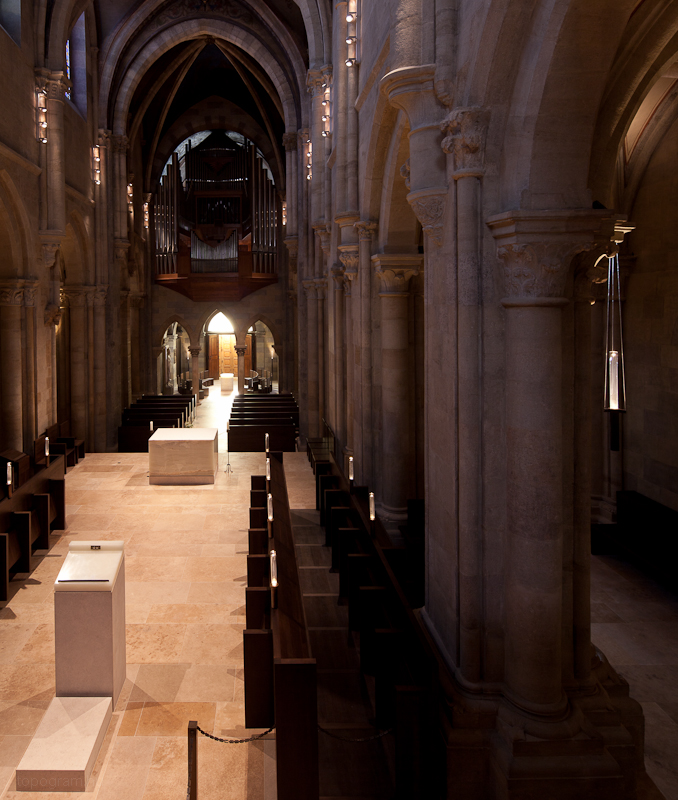 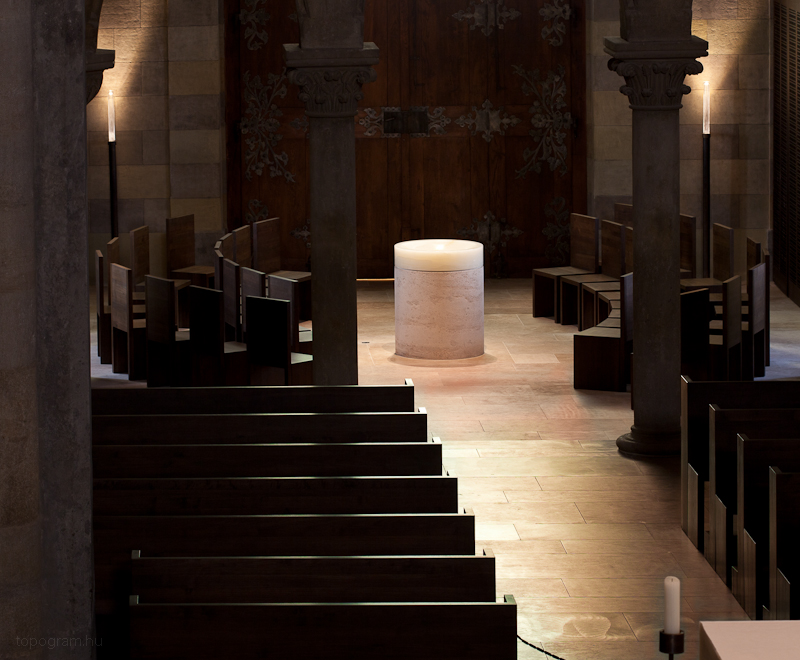 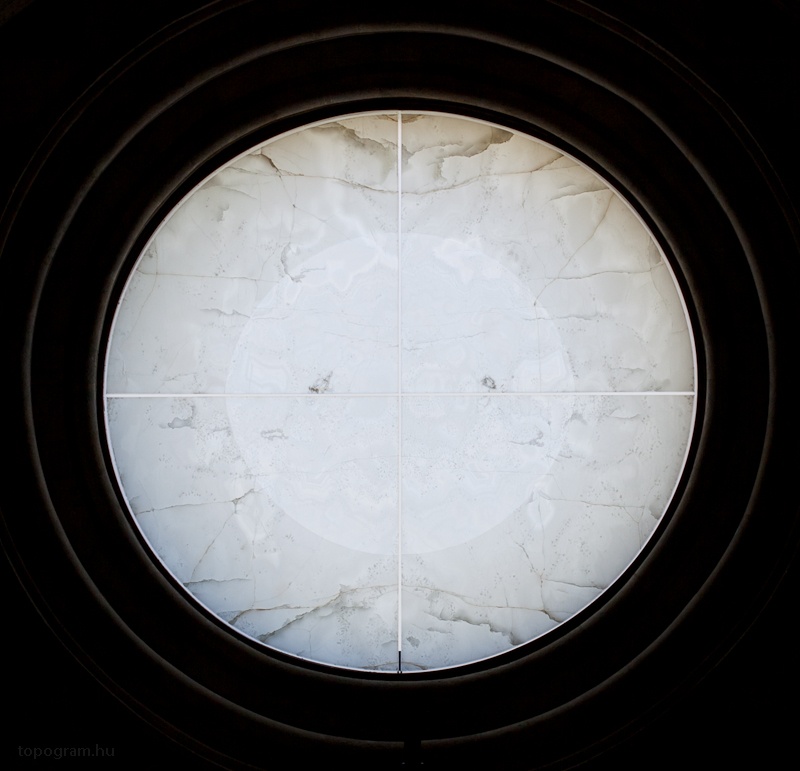 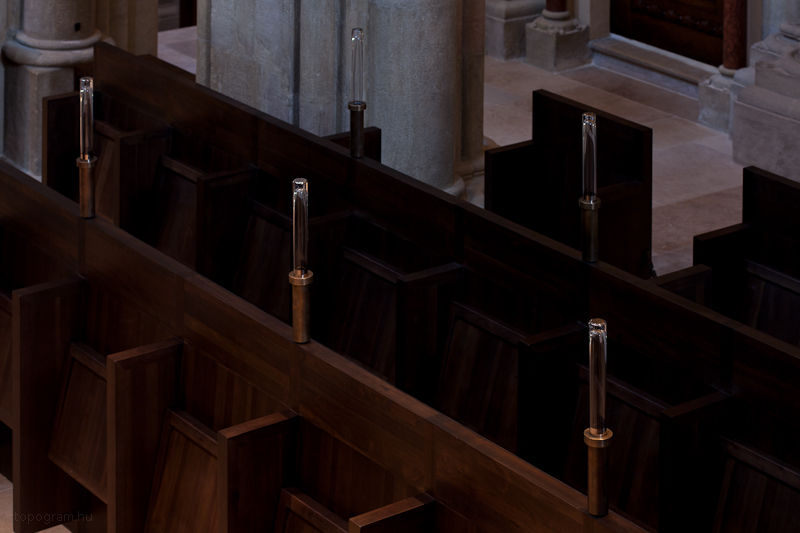 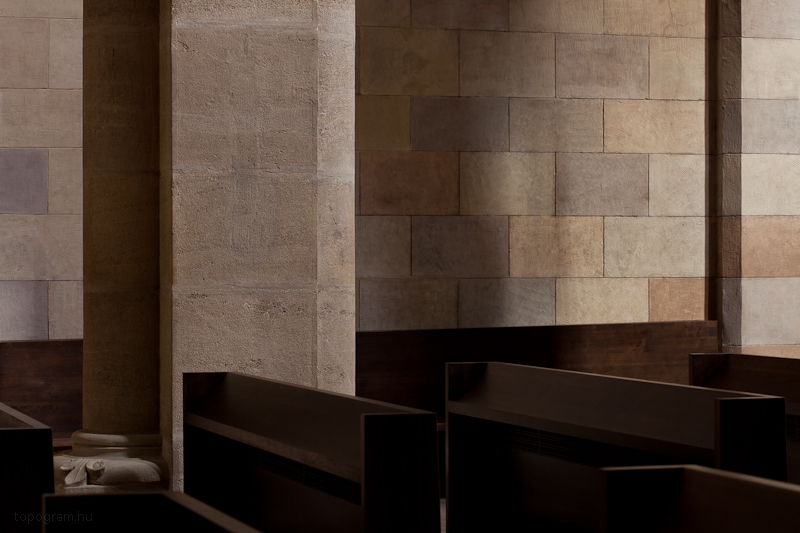 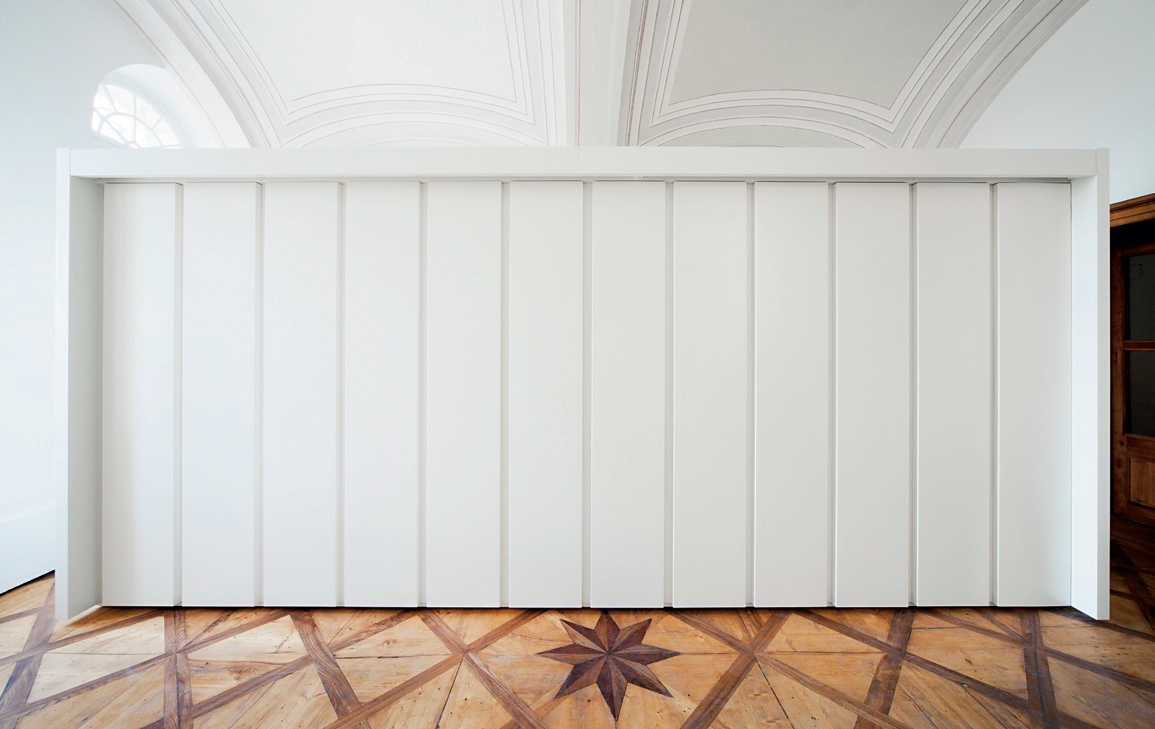 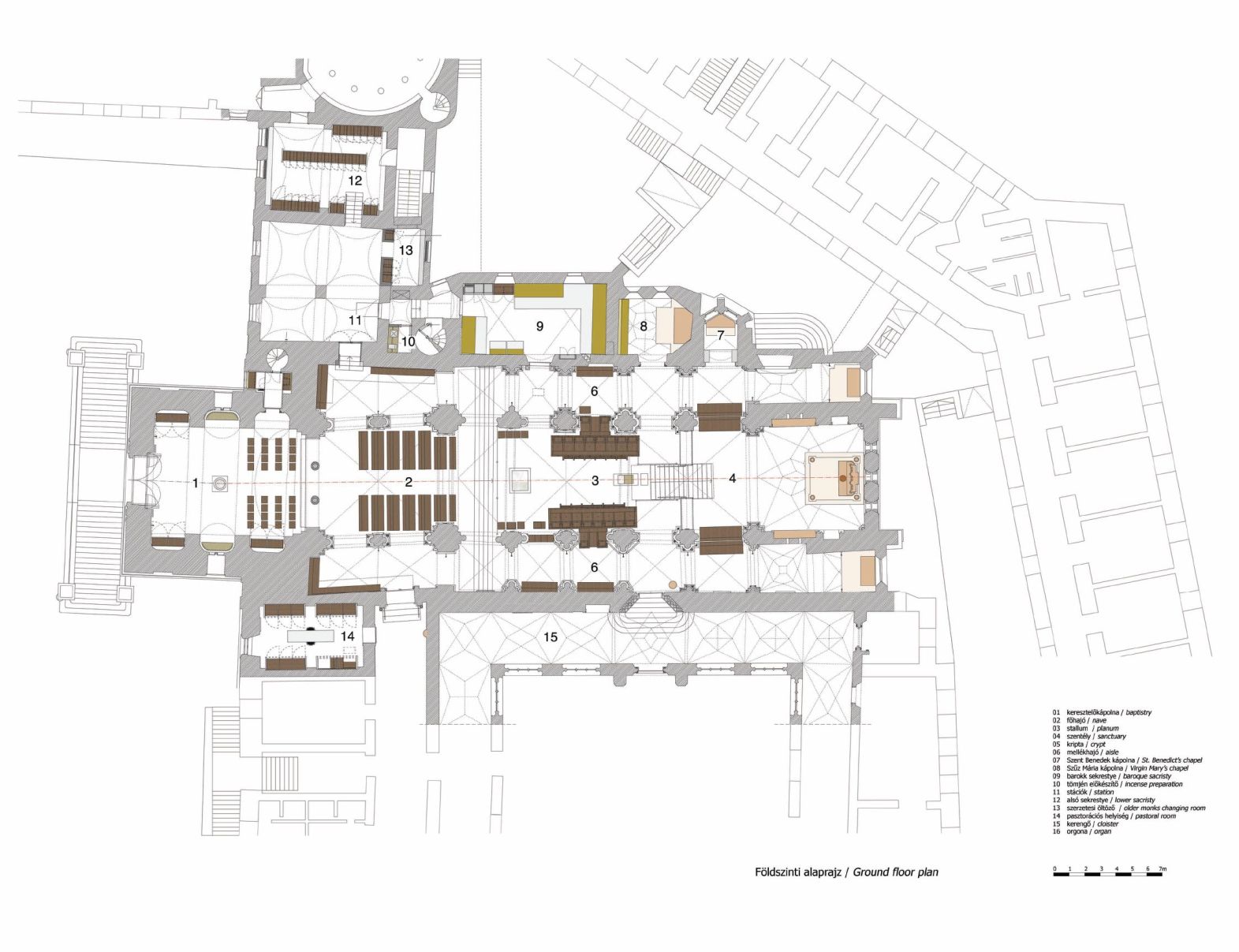 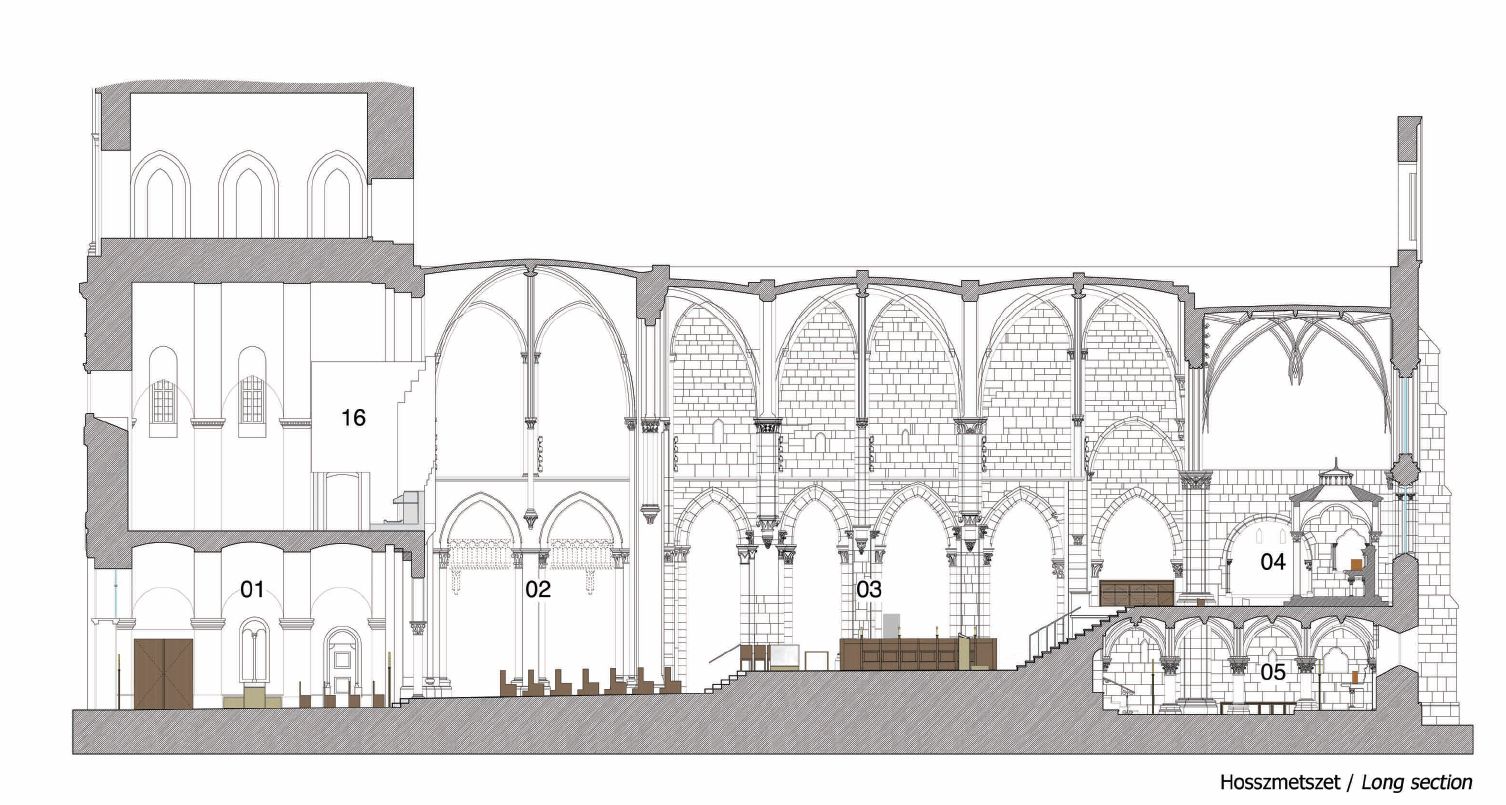 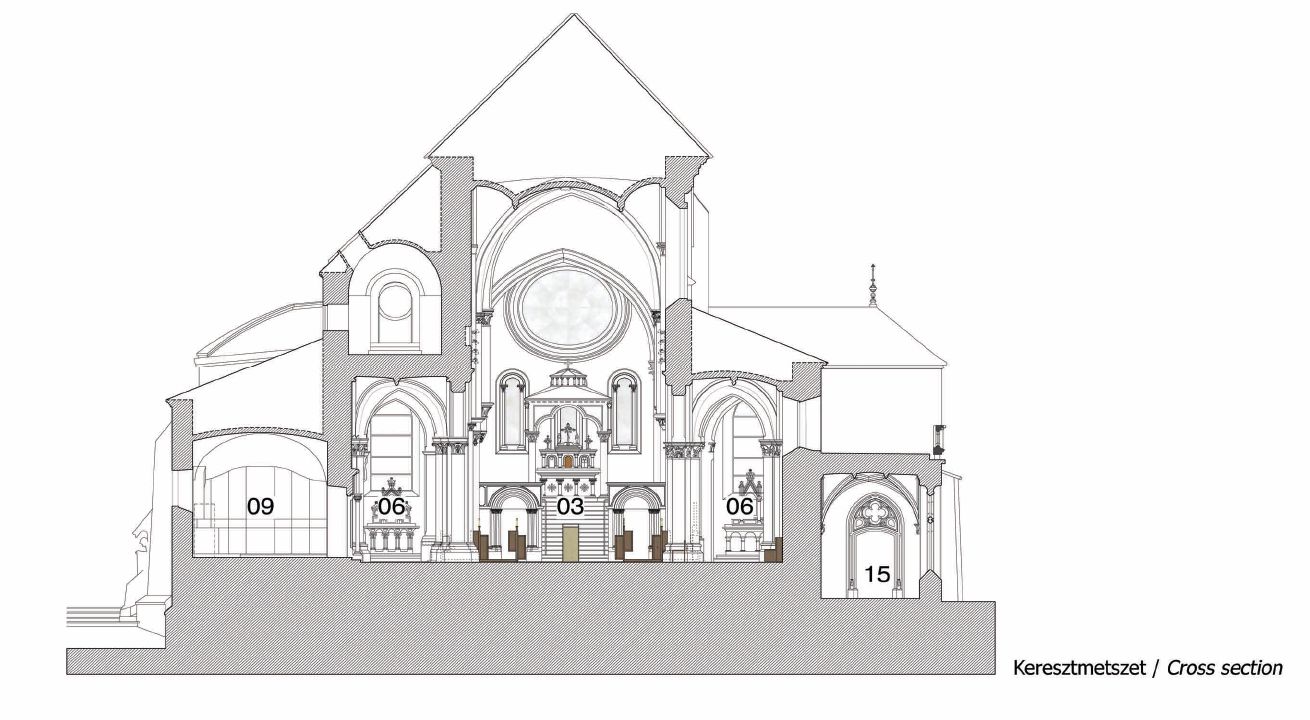 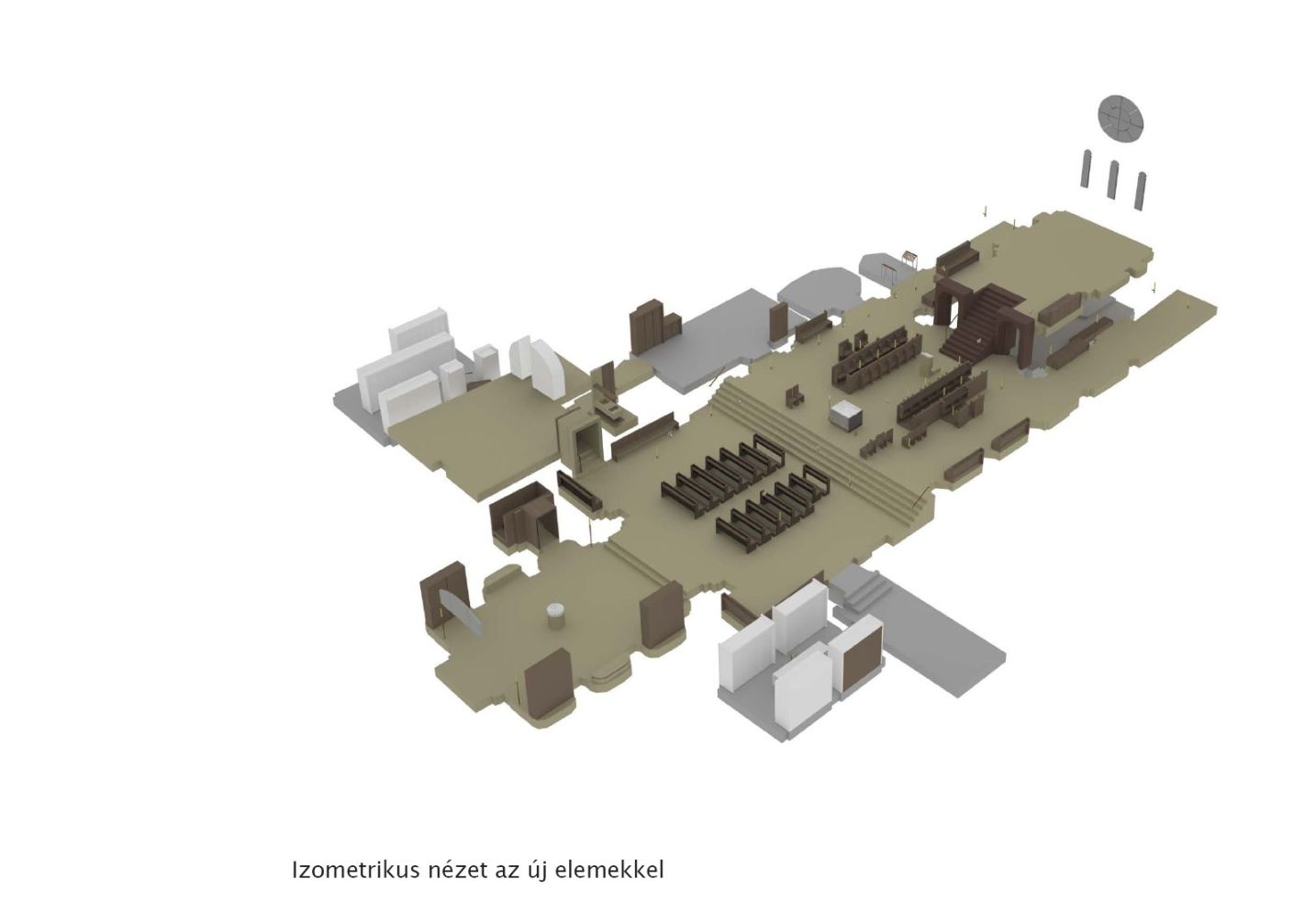 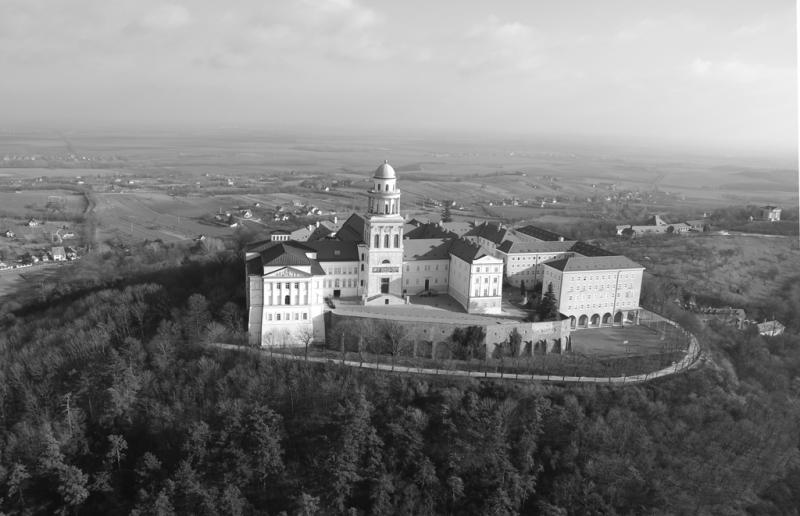 Tagged on: 3H építésziroda, Anna von der Schulenburg, Gunther Zsolt, John Pawson, Pataj Orsolya, Stefan Dold, Tavaszi Tamás
By | 2014-07-22 | '11-'15, Pannonhalma, sacred |
This page belongs to the Critical Analysis of Public Buildings course, held by the Department of Public Building Design at the Technical University of Budapest. With the contribution of our students our aim is to create a comprehensive database collecting the most significant architectural works of the last 10-15 years in Hungary, at the same time making all the related publications also available. The homepage is updated regularly, the order of the publishing does not relate in any ways with the architectural value.